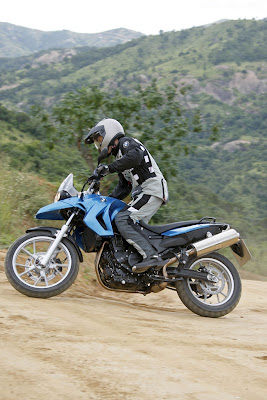 With its 71 hp, torquey twin-cylinder engine, the all-new 2009 F 650 GS offers more power and sophistication than its single-cylinder predecessor. Ideal for on- or off-road riding, urban commuting and any rider looking for a fun, efficient and reliable motorcycle, the middleweight twin tackles anything the ambitious motorcyclist could throw at it. Its rigid steel tube trellis frame, double-sided swing arm and chain drive offer reliability. A low seat height and narrow design make navigation through the worst traffic a breeze. Cast aluminum wheels and telescopic forks keep the ride smooth and precise at all times.

The F 650 GS is the newest addition to BMW's dual-sport line up. It follows in the footsteps of the highly acclaimed R 1200 GS - which traces its roots back to the early 1980s when BMW won the grueling Paris-Dakar rally four times with its trailblazing dual-purpose R 80 GS. Since their debut in 2004, the versatile R 1200 GS and its rugged companion, the R 1200 GS Adventure, have earned praise from motorcycle enthusiasts and the press for their exceptional performance both on and off the road.

The R 1200 GS has earned award after award, including Cycle World's Best Open Class Street Bike and the International Journalist's Panel "Best Bike in the World." The R 1200 GS Adventure was named "Best Adventure Bike" three years in a row by editors of Motorcyclist Magazine.