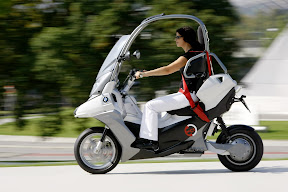 This is what a safe, environment-friendly and highly practical single track vehicle for city traffic could look like in the future. BMW Motorrad developed the C1-E study as a contribution to the European safety project eSUM. This study unit is based on the concept of the BMW C1. It is characterized by a very high level of active and passive safety and is driven by an electric motor.

The BMW C1-E provides exemplary protection for its rider. This is ensured by the safety cell with the conspicuous roll-over bar which dynamically spans the rider seat in combination with the energy-absorbing impact element at the nose end. A further special point is that the C1-E rider wears a seat-belt. In the study this safety feature is highlighted by red belts and belt buckles.

Visually the concept vehicle expresses brand typical sheer driving pleasure and clearly distinguishes itself from typical scooter looks. Its lines are dynamically stretched and flow horizontally with a low visual centre of gravity. The fairing with its windscreen, the luggage space behind the rider and the side stand for effortless parking ensure high suitability for everyday riding combined with a high degree of wind and weather protection.

The electric motor employed in the study has been designed for city use and is based on components by the company Vectrix. The motor obtains its power from a lithium-ion battery and thus possesses sufficient power for mastering most inner-city traffic riding with ease. Alternatively the vehicle could also be equipped with an efficient, low-emissions internal combustion engine.

The safety features of the C1-E have been taken from the former BMW C1 and further enhanced. BMW's avant-garde two-wheeler is regarded as a milestone in safety on two wheels. It is the only motorised single-track vehicle to be exempt from mandatory helmet wearing in almost all European countries.

This BMW Motorrad study is to remain the only model of its kind. Series production is currently not planned. Nevertheless, findings from the project will find their way into other future developments in the field of single-track vehicles. 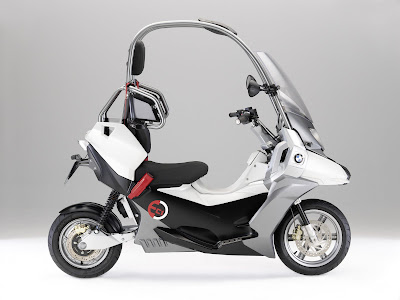 eSUM stands for European Safer Urban Motorcycling. It is a cooperation project between major urban European motorcycling centres and motorcycle manufacturers.  The cities currently involved in the project include Paris, Rome, Barcelona and London and the manufacturers are BMW and Piaggio.

The advantage of two-wheeled transportation is that it offers a great opportunity for improving the flow of traffic in urban locations. Moreover, it is environmentally friendly and lends itself to individualisation. However, the vast majority of accidents occur in urban traffic, in areas where 80 percent of the population live. The idea behind eSum is to look into ways of countering this trend. The joint goal is the identification, development, and practical demonstration of measures which are able to guarantee safe motorcycle and motor-scooter transport in the inner-city traffic of the future.

One of BMW Motorrad's major concerns over the last twenty years has been the improvement of motorcycle safety. This was amply demonstrated by the consistent strategy which has led to the Motorrad ABS and continued with its long-term ongoing development. Only a few weeks ago, on August 31, the 1,000,000th BMW motorcycle with Integral ABS, a BMW K 1300 R, left the production line in Berlin-Spandau.

Since 2005, a series of further active safety features have been developed to enhance the safety BMW motorcycles still further: RDC Tyre Pressure Control, ASC Anti-Slip Control, the new Race ABS and the DTC Traction Control incorporated in the new BMW S 1000 RR, not to mention the innovative range of BMW Motorrad rider equipment.

Over and above this, BMW Motorrad is also conducting research into forward-looking rider assistance systems designed to increased road safety, as part of the ConnectedRide project. Features being looked at include cross-traffic and traffic-light assistance as well as a warning system for impending poor weather, road obstacles, an approaching emergency vehicle, or sudden braking manoeuvres. 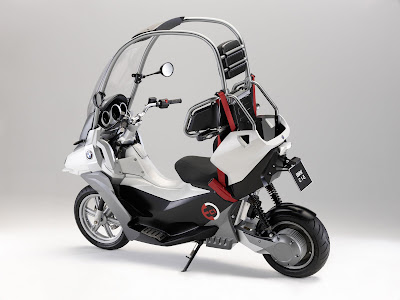