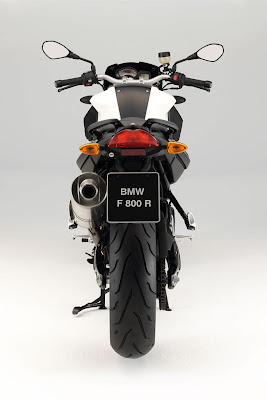 BMW most recently struck out on a new path in the segment of medium category motorcycles with the F 800 series launched in 2006. In addition to the sporty F 800 S, the first model variation to be presented, and the F 800 ST with its touring capabilities, the fourth BMW Motorrad engine series was supplemented in 2007 with the F 800 GS and the F 650 GS - two dynamic enduro models in the very best BMW GS tradition.

With the new F 800 R, BMW now takes the logical step of expanding the F 800 model series further by presenting at the EICMA 2008 - the Milan motorcycle show - a sporty roadster in the segment of medium category naked bikes designed for a high level of riding dynamics and maximum riding fun. Alongside the two roadsters R 1200 R and K 1300 R, this is now the third BMW roadster to see its world premiere in the BMW Urban world of experience: the new F 800 R, the dynamic BMW naked bike for the medium category.

The engine of the F 800 R is the parallel twin with 4-valve technology and a capacity of 798 cc, already familiar from the F 800 S. While the highly distinctive in-line 2-cylinder engine of the previous models was especially impressive due its pulling power, spontaneous response and low level of fuel consumption, the new model now refl ects a f urther optimisation of engine and throttle response thanks to a new throttle valve kinematic system.

The rated output of the engine is 64 kW/87 bhp at approx. 8,000 rpm and produces a torque of 86 Nm at approx. 6,000 rpm. The mass compensation of the parallel twin is implemented by a system which is still unique in serial production motorcycle construction in which an additional swivel rod compensates the fi rst-order and second-order mass forc es, ensuring that the 2-cylinder engine runs with an unusually low level of vibration which is especially pleasant for the rider.

Closely based on the big BMW roadster K 1300 R in its design, the distinctively sporty F 800 R with its orientation towards a high level of riding dynamics delivers just what its dynamic exterior promises. From standing, the F 800 R possesses considerable sprinting power. What is more, shorter gear ratios BMW in fourth to sixth gear ensure improved continuity; in conjunction with the excellent pulling power of the two-cylinder this makes for a highly agile and sporty performance. Important contributions to the outstanding dynamics of the new F 800 R are also made by the low dry weight of approx. 182 kg or approx. 204 kg fully fuelled and the chassis with double-sided rear-wheel swing-arm which is especially adapted to the requirements of a sporty naked bike. In accordance with the style and purpose of a sporty naked bike, the new F 800 R also has a secondary drive with O-ring chain. In line with the demands of a dynamic roadster, the chassis is designed for excellent handling, agility and steering precision, and therefore maximum riding fun on winding country roads, though without compromises in terms of directional stability at high speeds, for example when riding on the motorway.

The streetbike freestyle world champion Christian Pfeiffer provides a foretaste of just how playfully the rider can handle the F 800 R. For over two years now he has ridden a version of the F 800 S exclusively tailored to his needs at international competitions and shows: the similarity of this bike to the current F 800 R is by no means coincidental. In future, the motorcycle acrobat will be able to demonstrate his skills on a machine based on the new F 800 R. But the new F 800 R boasts more than just sporting talent: in the very best tradition of BMW it also possesses classic virtues such as outstanding seating comfort for rider and pillion passenger as well as an exemplary level of safety. For example, the F 800 R is optionally fi tted with an ABS whose newly developed pressure sensor provides an even fi ner regulation of the system and therefore even greater safety - especially in connection with sporty riding. What is more, the extensive BMW Motorrad accessory program meets all customer demands in terms of individual fittings . 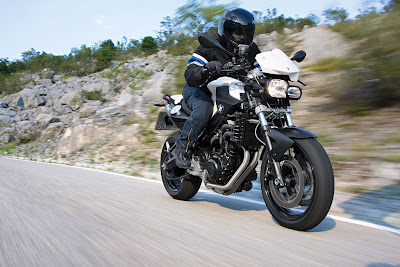 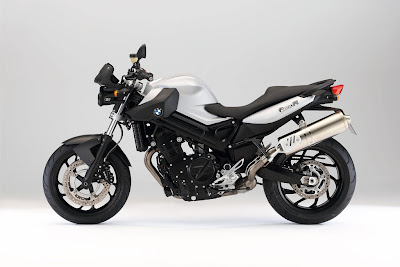