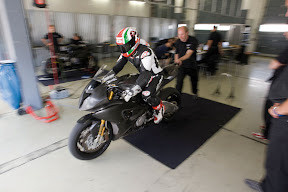 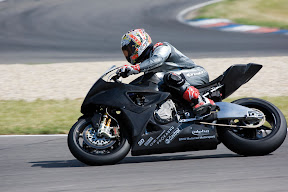 In the eight months since BMW's announcement that they would enter the Superbike World Championship in 2009, the project has gathered pace and race fans everywhere have now been able to see the tangible aspects of the project properly for the first time. The new BMW S 1000 RR has been tested at various racetracks in Spain, but it has now had its first test at a track used by the Superbike World Championship - the Eurospeedway Lausitzring.

The German circuit was on the WSBK calendar up to last season and the recent two day test gave the team a chance to compare their lap times and performance with last year's race weekend. At the end of the test, the team and the three test riders were all happy with the progress of the bike and eager to work on analysing all the data before moving on to the next stage in the bike's development.

The three riders, Steve Martin, Kevin Curtain and Jeremy McWilliams, said "The basics of the S 1000 RR are very good, the engine has good power, the chassis and suspension are working well and the bike has the basis of a Superbike racer already." This sentiment was echoed by BMW Motorrad Motorsport's General Manager Berti Hauser, who added, "I am very happy with the professional way all three riders worked and the amount of feedback they have given us. We are under no illusions of the amount of work we have to do before the start of the season next year, but we are ready and looking forward to facing this huge challenge. Up to now, we have done very little work on the electronics and have preferred to get the bike's basics working well and I think we have achieved that. If our project continues at this good pace, I think we could surprise a few people next year."

Whilst the main focus of attention has been at the track, a lot of work has been going on near Rosenheim, a small town about sixty or so kilometres south east of BMW's headquarters in Munich. It is here that BMW Motorrad and their partners, Alpha Technik, will prepare the Superbike racebikes in a brand new state of the art facility, incorporating 7,000 square metres of workshops and offices. The main workshop area is split into three parts and has two dynos - one for the whole bike and another which can simulate any racetrack in the world. One of the three buildings will house BMW Motorrad´s Off-Road and Enduro team, whilst the other two will be for the Superbike project and for spares and parts. The progress of the facility's construction has been rapid and eight months ago there was nothing but grassland where there are now workshops, offices, meeting rooms and a canteen for all the employees. The new facility marks just another step of BMW Motorrad and Alpha Technik on their way towards the 2009 Superbike World Championship season.