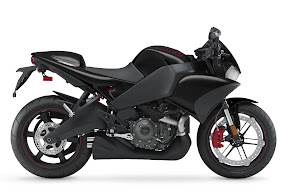 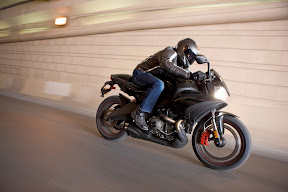 Buell brings superbike performance to the streetfighter category in 2009 with the introduction of the 1125CR, a new model featuring a modern interpretation of “café racer” styling and the power of the Buell Helicon 1125 liquid-cooled V-Twin engine. The 1125CR is one of nine 2009 Buell Sportbike, Streetfighter, Adventure Sportbike and Blast models.

“Part superbike and part streetfighter, the 1125CR is my vision of a 21st century café racer,” said Erik Buell, chairman and chief technical officer at Buell Motorcycle Company. “It’s got Clubman-style bars and a flyscreen instead of a fairing. Then we geared it down to optimize acceleration. With a class-leading weight-to-horsepower ratio, the 1125CR takes streetfighter performance to a new level.”

The Buell 1125CR
A café racer for the 21st century, the new 1125CR nods respectfully to the past with clubman bars, flyscreen and a tail cowl, while a 146-hp, liquid-cooled Buell Helicon 1125 V-Twin engine and Buell Intuitive Response Chassis (IRC) deliver the performance and handling of a modern superbike. Final-drive gearing is lowered about eight percent from the 1125R to optimize acceleration. Its sinister styling will make this bike unmistakable on the street.

New on Buell XB Streetfighters
Buell XB Lightning Streetfighters, powered by an air/oil/fan-cooled Thunderstorm V-Twin, get a menacing new look thanks to a blacked-out frame, forks, engine and other components. Lightning models powered by the Thunderstorm 1203 engine upgrade to the Buell ZTL2 front brake with four-pad, eight-piston caliper, a design that debuted on the 1125R in 2008. The XB12Ss gets fitted with the same supermoto-inspired suspension as the 2008 XB12STT, and the new seat on the 2009 XB9SX lowers the seat height by 1.3 inches to 30.1 inches.

New on Buell Sportbikes
The Buell 1125R, powered by the 146-hp, liquid-cooled Buell Helicon 1125cc V-Twin engine, is available in new body and wheel colors and with tinted windscreens for 2009. Also new for 2009 on the 1125R and 1125CR models are targeted fuel injectors, relocated O2 sensors, and updated engine spark and fuel maps. The combination of these features offers improved drivability below 6000 rpm, even crisper throttle response, improved heat management, and significantly improved fuel economy. The updated engine spark and fuel maps will also be made available for 2008 1125R models. The Firebolt XB12R, powered by the air/oil/fan-cooled Thunderstorm 1203cc V-Twin, has a new blacked-out frame, swingarm, powertrain, forks and other components. The performance of the 12R is even better in 2009 with the addition of the eight-piston Buell ZTL2 front brake, and new high-performance Pirelli Diablo Corsa III tires.

New Drive Belt
All 2009 Buell XB models will be fitted with a new, more durable Veyance Hibrex drive belt with Flexten Plus technology, the same belt technology that was originally developed for the Buell 1125R.

Economical Buell Blast
The easy-handling and affordable Buell Blast inspires confidence in new riders and offers performance to satisfy an experienced motorcyclist. Powered by a 34-horsepower, 492cc single-cylinder engine, the 360-pound Blast can achieve 73 mpg highway fuel economy. The Blast is the training vehicle for the Rider’s Edge New Rider course, which has trained more than 100,000 riders since 2000. For 2009, the Blast is offered in new Sunfire Yellow, and Midnight Black, both with Stardust Silver wheels.

The Buell Lightning XB12S and Lightning Super TT XB12STT will not be produced for 2009.

Buell Motorcycle Company, a subsidiary of Harley-Davidson, Inc., produces premium sport performance motorcycles, motorcycle parts, accessories and apparel. To learn more about Buell motorcycles, visit your local Buell dealer and experience the aggressive attitude, style and performance only found on board a Buell. For the Buell dealer nearest you, pull into www.buell.com.