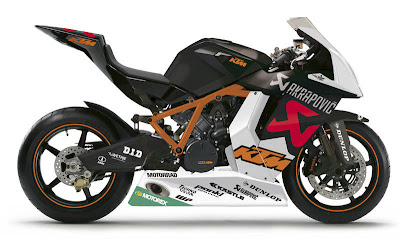 KTM has launched a limited edition RC8R "McWilliams" edition, named after IDM German Superbike rider Jeremy McWilliams who's racing the KTM in championship. The limited edition model is fully equipped with KTM's Club Racer kit, which comprises of an Akrapovic EVO4 full system, hi-lift cams and datalogging. KTM claims it produces 180bh - putting it on par with the Ducati 1098R.

Targeted specifically for club races, this edition is not street legal and only 100 units have been produced. It's not clear it and/or when it will be availiable in the US.