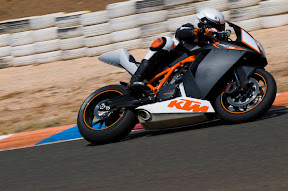 2008 marked a milestone in KTM's history as this was the year in which the company launched the first Superbike to be designed and manufactured in Austria: the fascinating 1190 RC8. This highly stylised machine highlighted KTM's sporty abilities on asphalt. The latest generation LC8 two cylinder motorcycle was designed from scratch. The high-tech drive has a displacement of 1148 cc and generates 155 HP and a 120 Nm torque. The carburetion is made possible by a fuel injection system with 52 mm throttle valves. The engineers positioned the silencer by centralising the masses beneath the engine, further optimising the nimble handling of the Superbike that weighs less than 200 kg with a full tank. The ultra-light frame also makes it possible to perfectly position the powerful yet highly compact engine and is equipped with premium-quality, fully adjustable WP chassis components. The subframe, footrests and clip-on handlebars are height-adjustable. A powerful Brembo brake system with four-piston monoblock brake callipers with 320 millimetre brake discs is used for superior deceleration. 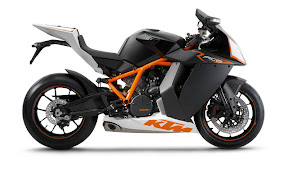 1190 RC8 R
Anyone who wants a 'Ready to Race' 1190 RC8 chooses the extremely powerful, ultralight and extraordinarily refined 'R' version. The engineers have used a 2 mm larger bore to increase the displacement to 1195 cc, which, together with the other modifications, has increased the output of the powerful V2 engine to 170 HP. Comprehensive detailed work on the engine has also enabled a more direct response and further optimised rideability. Along with its other benefits, the overhauled chassis impresses through its far greater caster angle, which increases the top speed stability. The numerous high-end components include the front carbon mudguard, the premium-quality, milled triple clamps, the fully adjustable WP chassis components with a frictionreducing coating and the super lightweight, forged Marchesini wheels make the RC8 R not only more playful to handle but also faster. The race winning RC8 R also performs impressively on normal roads. 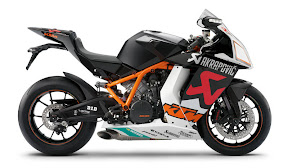 1190 RC8 R AKRAPOVIC RACE REPLICA
KTM presented the first of 100 RC8 R Akrapovic Race Replicas within the scope of the 2009 IDM finale in Hockenheim. Once optimised with the supplied club race kit containing an Akrapovic exhaust system, a modified cylinder head gasket and modified mapping, the eye-catching machine generates 180 HP, making it one of the world's most powerful superbikes. Of course, the impressive Race Replica is also fully road homologated with the original exhaust system. After all, the high-tech two cylinder motorcycle that was successful at the IDM - the racing machine was ridden by famous Jeremy McWilliams - already comes as standard as a state-of-the-art superbike that already impresses through its highly refined fittings, racing-adapted WP suspension chassis components and exquisite Brembo brake technology. The Race Replica now tops off the design. In evidence of the successful cooperation with Akrapovic, the leading manufacturer of high-end exhaust systems, each of the 100 numbered motorcycles are extraordinary collector's items which are as rare as they are fast. 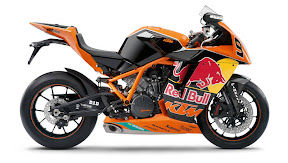 1190 RC8 R RED BULL RACE REPLICA
KTM first entered the IDM superbike class with its long-term partner Red Bull in´2009 – and had a great first season! After eight events and sixteen races Stefan Nebel had finished in the points fifteen times, achieved four podium positions and collected 184 points to become runner up in the IDM championship. The RC8 R riders Didier van Keymeulen, Kai-Borre Andersen and Jeremy McWilliams also achieved great results. A good enough reason for KTM to develop the refined 1190 RC8 R Red Bull Edition - in the style of the IDM bikes with the high-tech qualities expected of an RC8 R. The dynamic two-cylinder generates a power output of no less than 170 HP in the road-homologated version, which can be further increased by another 10 HP with the club race kit. The adjustable vehicle and seat geometry, premium-quality, fully adjustable WP chassis components, forged Marchesini light alloy wheels, Brembo highperformance brakes, milled triple clamps and carbon mudguard make one thing clear: the 1190 RC8 R Red Bull Edition is purely 'Ready to Race'.