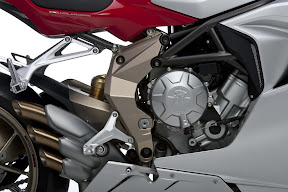 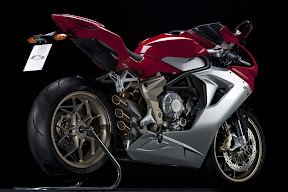 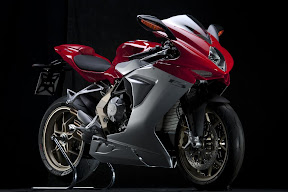 The new MV. A new work of art on wheels is arriving that will upset the balance of power. As with all MV’s this new model is synonymous with excellence, style and technology. The new F3 will apply these principles to a new market segment, the middle weight supersport category.

If the F4, considered the most beautiful motorcycle in the world, set the styling and performance standards by which all others are judged, the new F3 has completely exceeded all previous conceptions of what a supersport motorcycle should be, redefining an entirely new category. Light weight, power and electronics working in complete harmony on a new motorcycle that pushes the concept of supersport to the extreme.

Powerful, hyper-light and more compact than any other motorcycle in existence. The F3 sets the new standard by which all other supersport motorcycles will be judged and compared. A completely new project that was created by CRC, the research center that has continually designed and developed the motorcycles of dreams.

The styling is pure MV Agusta, as with its big sister the F4, but the F3 is even more unique. The new “middle weight” by MV follows the philosophy of all the MV Agusta works of art while pushing the limits of the supersport category with a maniacal attention to detail. The exhaust system has a triple pipe side exit muffler and is the perfect example of how design and function coincide perfectly. There is no doubt, the new F3 is a true MV Agusta!

The powerplant of the new F3, an inline 675cc three cylinder, plays homage to the most victorious motorcycle brand in the word. With this layout MV raced and won an unprecedented number of races and world championship titles. This iconic engine has now returned in the form of an avant-garde middle weight supersport with performance technical solutions based on the demands of Claudio Castiglioni who is convinced that this is the ideal architecture for a middle weight supersport.
The engine is the most compact, incredible short and narrow engine ever seen in this category. The powerplant is incredibly modern in design, technologically advanced and capable of generating the most power ever seen in this category. One of the numerous technical features is the counter-rotating crankshaft, never before seen on a production supersport engine.

The most advanced electronic engine control system has been designed specifically for this extraordinary three cylinder. For the first time on an MV (and in the middle weight supersport category) there is Ride By Wire with multi-maps that optimize the power output in all riding conditions. The MV TC traction control has been incorporated into the engine control system raising the dynamic control to a new level on the F3.

As always, those who ride MV Agusta’s have become accustomed to having the very best components and the maximum performance from the chassis. The new F3 follows this tradition with a level of quality that exceeds most of the 1000cc superbikes on the market. As with all previous MV’s, the advanced frame design incorporates a mix of steel tubing and aluminum side plates that wrap around the ultra compact engine offering a level of compactness never before seen on a supersport motorcycle. The compact engine dimensions left the maximum liberty to design the most advanced chassis on the market with an exceptionally long single sided swingarm that guarantees traction and feedback to the rider. The components, as always, are of the highest quality. The Marzocchi front fork is completely adjustable as well as the Sachs rear shock. The front brake system consists of a Nissin radial master cylinder and Brembo radial calipers and discs. It is simply the best and the new standard by which all other middleweight supersport bikes will be judged.

THREE CYLINDERS, MADE IN ITALY

The dominance of MV Agusta in the motorcycle Grand Prix’s is in part due to their most victorious engine design. Of the 37 world titles won by the bikes from Cascina Costa, 10 are attributed to the bikes with the inline three cylinder engines. MV Agusta was the first motorcycle manufacturer in the world to believe in this technical solution, a risk that paid off with countless victories. The three cylinder project began as a twin cam 350 followed by a 500cc version, these bikes were legendary for their power as well as their lighter weight and improved aerodynamics compared to the 4 cylinder competition.

The project was designed at the request of Count Agusta, developed on the race track by Giacomo Agostini and raced by the greatest champions of all time winning immediately. Initially the 350 twin cam, followed by the 500 twin cam, these motorcycles became the reference point for all of the other manufacturers as they offered unmatched performance allowing them to dominate the competition. This dominance was translated into 10 world championship titles, 9 Italian championships and 215 race wins. The MV three cylinder was a motorcycle unequaled by the competition by applying technology that was advanced for its time and destined to become the future for all high performance engines.

Even today, the classic three cylinder MV Agusta is an example for the rational application of technology and pure styling. A style so unique that it transcends to the soul of the MV’s of today. Having to choose which engine layout would power the new MV Agusta middle weight, Claudio Castiglioni chose the most rational configuration of the three cylinder. A choice that is technically advanced while at the same time respects the long history of MV Agusta and their countless successes with this engine layout. Today, as well as in the past, the F3 takes advantage of a very compact design, advanced technology and unparalleled power.
With the new F3, history and future are fused into a single entity giving form to the most beautiful and technologically advanced “600”, a motorcycle that clearly marks the beginning of a new era.