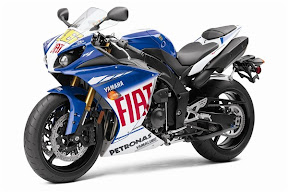 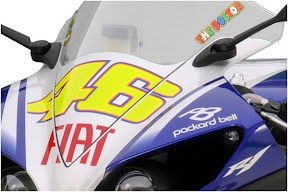 Don't say we didn't warn you to forget everything you ever knew about the supersport liter class. Moto journalists and consumers agree once you hear the growl of the YZF-R1, it is clear that this bike is unlike anything before. Winning on the World Superbike racing circuit and in the motorcycle press, the R1 was chosen as the 2009 Motorcycle of the Year by Motorcyclist Magazine for its MotoGP® inspired engine and chassis technology and its luxurious fit and finish.

New for 2010, the R1 will be offered in an LE Limited Edition complete with Valentino Rossi/Fiat Yamaha livery including the number "46" and "The Doctor" logos. Each LE will also contain a replica of Valentino's signature on the fuel tank.

It's all about power - delivery of power, to be exact. That's because the R1 is the world’s first production motorcycle with a crossplane crankshaft. Originally pioneered in MotoGP racing with the M1, crossplane technology puts each crank pin 90 degrees from the next, with an uneven firing interval of 270-180-90-180 degrees. The result is incredibly smooth, roll-on power delivery with outrageous amounts of torque for a rush like you've never experienced before.

The inclusion of D-MODE variable throttle control function enables the rider to adjust performance characteristics to match a variety of riding conditions. In addition to standard mode mapped for optimum performance, the rider can select from A mode for sportier response in low to mid-speed range, and B mode for somewhat less sharp response for riding situations that require especially sensitive throttle operation. These 3 different maps at the push of a button allow the rider to choose the optimum power character for their riding situation.

More than the just the next-generation of supersport; the YZF-R1 represents a major breakthrough in supersport technology and performance.

The 2010 R1 will be available in dealerships nationwide beginning in September 2009 with a starting MSRP of $13,290 and available in Raven, Pearl White and Team Yamaha Blue/White.

The R1 LE will be available in January 2010 with a starting MSRP of $14,500 and available in Fiat Yamaha Team graphics.

Full information on all Yamaha models can be found at http://www.yamaha-motor.com.